Sticky Post By Start Your JRNY Posted in Partners Permalink

TEAMLTD launched in Mississauga during April of 2012, which makes them our only Partner not located in the Forest City. HOWEVER, dating back to 2013 we first started our JRNY with the great people at TEAMLTD at a music festival called ‘Campstock,’ one of our many side projects. Since then, and many side projects and full-time projects later LTD has supported our dreams in ways far beyond apparel.

TEAMLTD is a Lifestyle & Apparel Brand connecting people who are ‘Living The Dream.‘ Each is unique to their customers & friends and with that, they pride themselves on being able to grow & share whatever those dreams may be. As Jamie Visser shared “We created our brand to fit the lifestyle that we all live.”
Although LTD is the only Partner on Start Your JRNY that doesn’t have roots from London we’re sure you’ve seen their merchandise proudly represented around the city, across Ontario, Canada & even Internationally.

It’s truly an honour to have TEAMLTD as a partner on this project. Thank you for your neverending support, we only hope we return the favour! 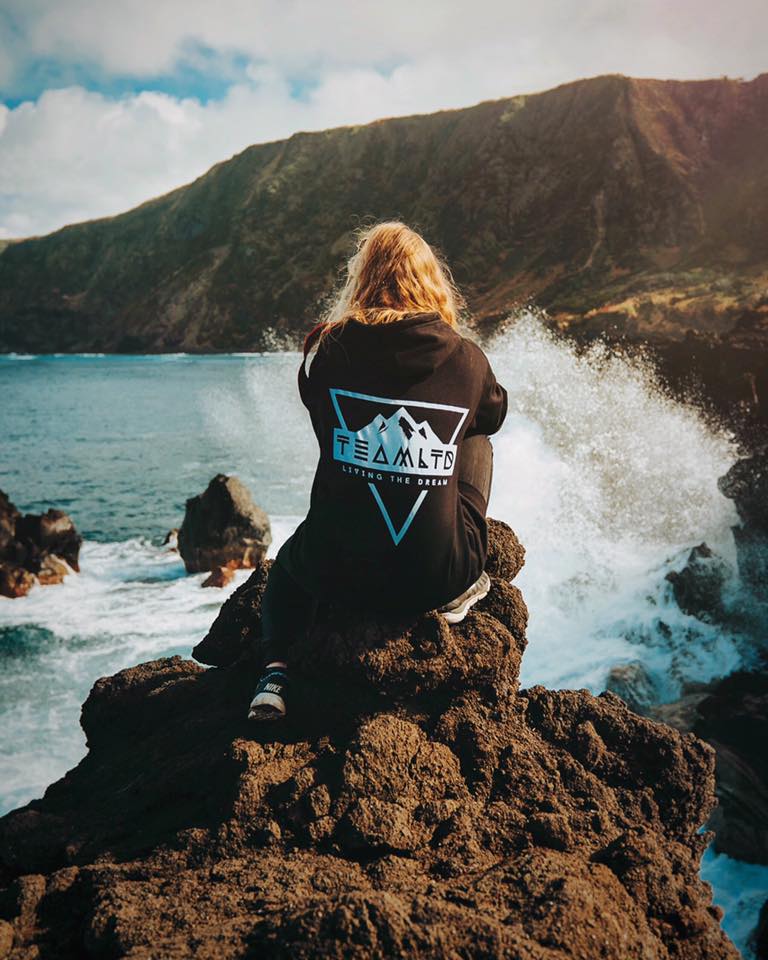 Nash Jewellers has a rich history dating back to 1918 after John A. Nash borrowed $500 from family and opened ‘John A. Nash and Son Ltd.’ at 2061/2 Dundas St.; then two years later moved into 182 Dundas Street, the iconic location that just vacated in 2016 to their new home at 655 Wonderland Road.

Colin Nash, (Current Owner and Operator of Nash Jewellers) Grandfather took over the business in 1936 and became Canada’s first Registered Jeweller and American Gem Society Member, graduating through the Society in 1948. John C. joined in 1976 after achieving his doctorate from the University of Western Ontario. He established Canada’s second accredited gemological laboratory in 1980 along with many other achievements over the next 20 years.
In 2000, John expanded the business into a second location while his 3rd born son Colin started working for the firm. Colin’s passion for watches and brands led the business to where it is today. “He has moved us from the Nash Brand that we espoused from 1918, to the more modern ‘brand emphasis’ immediately obvious the moment you step inside our new location: where we anticipate operating for the next 100 years!”

They’ve achieved many awards over their 98 years from BBB Integrity Awards to Chamber of Commerce Business of the Year, Downtown Champion, Consumer Choice Awards and much more. Their highest honour achieved is the Robert M. Shipley award, given by the AGS. John C. Nash received this award in 2007 for his outstanding achievements in the industry being the first ever Canadian to receive it.

Nash Jewellers has not only contributed profoundly to our forest city but Canada-wide as well and we could not be more proud to have them in support of Start Your JRNY.

CONTRIBUTION
An engraved Start Your JRNY Dog-tag(s) to our finalist(s).

Established in 1983 by engineer and producer Paul Steenhuis, OIART is the largest full-time faculty of any audio school in Canada. With its unique educational model that has been in development for over three decades, the program provides training to audio engineers in music production, recording arts, audio engineering, sound recording and other related felids. They provide a 5:1 student to teacher ratio which gives their students full-time access to their instructors, on a first name basis. Even lab times are supervised so there is consistently someone close by to guide you through the learning process. In addition, they also supplement the program with a guest faculty which provides real-world perspectives to its students.

OIART has been proudly London based for the last 34 years, supporting the local music scene from the JRLMA’s, Sunfest, to the current London Music Committee. Dean Nelson Engineer, Producer, and Educator at OIART shared with us “From recording a Beatle to the Hip and Drake, broadcasting the Olympics & Stanley Cup, and audio work on Grammy, Juno, Oscar, Gemini, and Emmy award-winning projects, OIART graduates are our proudest achievement.”

They’ve not only successfully helped grads find jobs in the prime areas of music production, live audio and audio for visual media such as film, television, and gaming but have achieved a completion rate that is significantly higher than the provincial average attracting students from around the world.

It’s clear to see that your students really are your proudest achievement. Thank you for support on Start Your JRNY and your contributions to our local community!

In 1975 Fanshawe College‘s “Creative Electronics” program was born. Originally created by Tom Lodge, an English author, and radio broadcaster; the program began to evolve into ‘Music Industry Arts‘, (MIA) a training program for recording engineers and record producers.
The program was re-energized by legendary Canadian producer, Jack Richardson. As a former faculty member, he inspired students to be knowledgeable and ahead of emerging trends and technologies in the music industry. Richardson had mentored and trained many of the industry’s leaders across North America and is perhaps best known for producing the biggest hit records from The Guess Who from 1969 to 1975 and The Juno Award for “Producer of the Year” that has been named in Richardson’s honor since 2002.

Graduates of this program have led the industry by leaps and bounds with Grammys, Emmys, Junos and many other great achievements. Although it was originally known as an engineering and producing school, it has since expanded into artist development which as Dan Brodbeck says “Has brought new room energy to the city.” He also made mention that as he was sharing with us the Standstills, (graduates from 2009) were performing at Bud Gardens with Our Lady Peace and I Mother Earth.

In fact, most of our engineers at Prevail Music Studios are graduates from the Music Industry Arts Program. It seems as though no matter how much time has passed, MIA will always be there to support its artists. Thank you for the support on Start Your JRNY and for continuing to develop some of the many talented artists and engineers that hail from our great city.

“MIA gave me a sense of family and teamwork. It helped me develop the tools that I needed to become independent and get ready to work as well as express my creativity and discover new paths for my life. I can honestly say that the program and teachers involved have affected my life in such a positive way and helped me carve a distinct career path in the Canadian music industry.” – Andreas Rizek (Graduate 2014)

Created in November 2015 after a lengthy two and a half years of input and discussion from the community, The London Music Industry Development Task Force (LMIDTF) which was announced on June 5th, 2014, created the London Music Strategy, which then led to the creation of the #LDN Music Office that we now know and love today.

To sum this up for you, LMIDTF is a Task Force consisting of 22 individuals who represent every angle of music in London. It’s members represent a range of sub-sectors, and all genres of music, within the industry including:
• Independent Artists
• Events and Venues
• Artist and Business Management, Representation and Marketing
• Music Creation
• Associations, Organizations, and Partners; and,
• Music Awards Programs
Beginning in June 2014, five collaborative meetings of the LMIDTF were held in collaboration with each of its members to develop this community-wide comprehensive London Music Strategy. “London, Ontario will be a prosperous city which is recognized as supportive of our music community and focused on fostering new music related business opportunities.”

With the London Music Office‘s involvement in the cities community, it’s becoming clearer that a change is upon us! The effectiveness has quickly blossomed, transforming us into a true community here in the Forest City with the support of such task forces, strategies, funding and government programs. We’re thrilled to see our community become recognized as a crucial asset to our economic growth and open our eyes to the endless musical opportunities that reside here.

If you don’t want to take our word for it, The London Music Office shared a video with us from a few months back when they teamed with Tourism London to present a showcase that focused on emerging musicians in London, Ontario during Toronto’s Canadian Music Week 2016. #LondonIsOn at CMW 2016 features Taylor Holden, Wolf Saga, Julia Haggarty, Texas King, Mountain of Wolves & Hiroshima Hearts all of which agree when they say things are moving.

On a final note, I’d like to leave this with you. A quote from Paul Hubert during the development process of the London Music Office and Strategy.
London has developed an “identity issue,” Hubert said, saying whether it is economic development or culture or education or nearly any other sector, there is a constant feeling of things being better somewhere else — which he added, isn’t the case at all. “We fail to recognize the assets that are sitting in our own community. We’ve got to stop belittling ourselves as a city. London residents need to know what they’ve got in their backyard,” Hubert said. “We’ve got it all here; we just really need to leverage that. It drives me crazy when we put ourselves down and there really is no need to do that.”
Paul Hubert – Ward 8 Councillor

Thank you for your support on Start Your JRNY!

Prevail Media Group came together because each of our divisions had a dream; to make a difference in the lives of artists & business’ alike. #StartYourJRNY focuses on building the career of an artist or group as well as bringing together the community of London not only in the music & art sectors but the community as whole with the support of our Partners.

Since the beginning of this project, we took some time to really get to know our Partners. We quickly learned that each has its own rich and wonderful history all of which in our eyes has contributed to our great Forest City.

Over the next couple of weeks, we’ll be showcasing each of these businesses not only in their contributions but why they play such a key role in SYJ & our city.